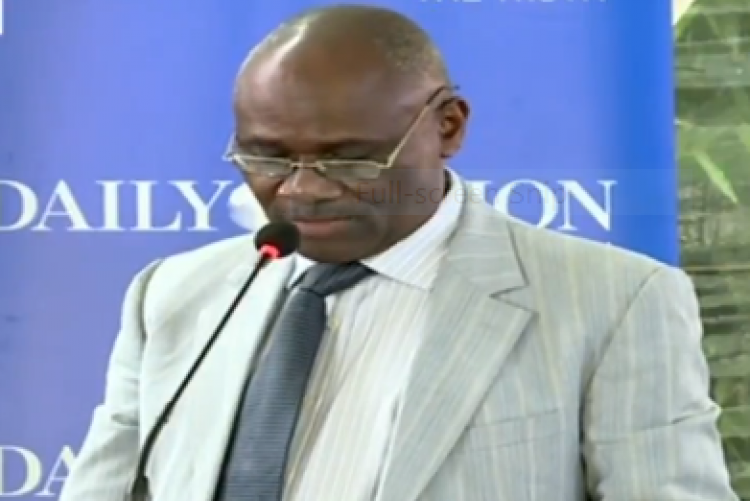 A Climate Action Breakfast Forum was held at the Serena Hotel today 14th October2021 under the theme ‘Road to Glasgow’. Climate change and its impacts are experienced in all parts of the world, and in the aftermath of disasters, the lasting effects of climate change on local economies and environments cause severe socioeconomic disruptions.

Environment and Forestry Cabinet Secretary Keriako Tobiko urged world powers to put aside their geopolitical differences aside and work together to tackle climate change issues ‘’Let’s make 2022 elections a climate change election; climate change does not discriminate; it unites us all. Said Tobiko. The CS further noted every country has a responsibility to the Paris agreement; every signatory of the Paris agreement irrespective of your emission levels has an obligation to contribute towards emission reduction.

The Ambassador to Denmark H.E Ole Thonke applauded the nation media group for leading by example. He noted it is key that media takes responsibility to report on the climate crisis in Kenya. He further noted climate change is the defining issue of our time and action must be taken

Deputy High Commissioner - United Kingdom Mr. Julius Court noted climate crisis is a daily reality in Kenya. ‘’we must act; the UK has spent over Kshs 17.5 billion on climate change in Kenya. COP 26 must be a success. Glasgow is a springboard for Kenya to lead’’. Court said

The United Nations Development Program me (UNDP) Resident Representative Walid Baadawi who also spoke at the event, praised the Kenyan leadership for its role in addressing climate change “Kenya stands out as a country that is truly committed to climate change. We have seen a lot of excellent innovations, e-mobility and electric bodabodas and young people converting waste to energy Baadawi said.

On his part the Vice chancellor Prof. Kiama who was represented by the Dean Faculty of Science and Technology noted climate change poses a number of challenges that ae complexly intertwined across the political, social economic and biophysical systems from local to national regional and global scales

The VC further noted the University has established establishment of two premier institutes – the Institute for Climate Change and Adaptation (ICCA) and the Wangari Maathai Institute for Peace and Environmental Studies. These two institutes aim to generate decision-relevant evidence related to challenges facing Kenya, East Africa and Africa in regards to climate change and environmental stewardship of Planet Earth. The VC further noted the University is way ahead of the pack in training the critical mass of scientists who are already providing robust suites of evidence that feed into key decision-making processes and community needs to improve on sustainable development outcomes through innovative approaches for mitigation of climate change causes and adaptation to its impacts.

Dr. Wilfred kiboro-Chairman Nation Media Group noted the issue of global warming is not a matter for the Government but for every single human being. ‘’ we have seen irregular weather patterns like drought in northern Kenya; livestock dying due to lack of water and pasture and people are dying, all these are related to climate change. Kiboro said

The climate action forum convened by the Nation media group comes ahead as the world heads to the 26th UN Climate Change Conference of the Parties, (Cop26) in Glasgow, UK on October 31.

The Cop26 summit brings together different members of the United Nations (UN) to discuss the Paris agreement, a global framework to work together in reducing emissions and mitigating global warming.

© University of Nairobi 2021.  All rights Reserved.